For a terrific review of Mickey's writing, take a listen here to Shelf Discovery.

When Seymour Allan loses his girlfriend, his depression is as dark as a South Florida thunderstorm. He hides out in a retirement community, drinks too much, and hangs with a feral cat. But when he meets the mysterious Raymond C. Dasher, Seymour's life changes as he embarks on a new career: professional griever.

Seymour's depression lifts when he spends time at the wakes and funerals of some very unpopular people. He cares for a dying criminal who loves T.S. Eliot and refuses to pass on, and he attends some unique burials that may or may not be legal. He also meets Yvonne, a sexy redhead dealing with the loss of her mobster boyfriend. Out in the Everglades, he has to face down a group of armed mourners and an alligator in attack mode.

Nothing like sex and danger, guns and gators, to make a man remember how good it feels to be alive.

The Physics of Grief is a unique, quirky crime novel presenting the upside of funerals and a hopeful look at second chances—and at death. 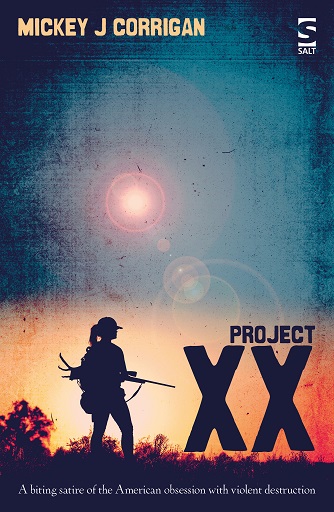 Males are almost always the perpetrators of mass shootings. But females are fully capable of shocking acts of violence and, in the US, military-style weapons are as easy to access as a new hairstyle.

Project XX is a biting satire of the American obsession with violent destruction in the midst of rampant materialism. The darkly humorous story of girls on a rampage will grip you by the throat and not let go until you gasp for breath on the last page.